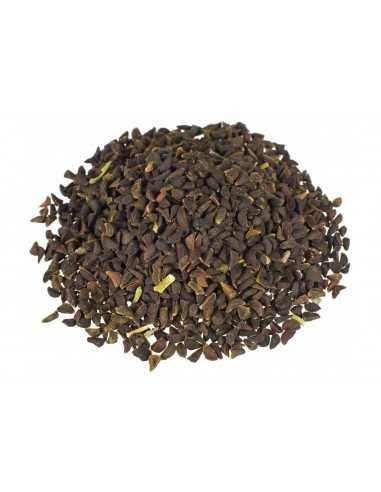 Peganum harmala, is an MAO inhibitor. It is often used in analogues of ayahuasca, because it is more concentrated and easier to prepare than the one traditionally used; Banisteriopsis caapi.

By buying this product you can collect up to 35 loyalty points. Your cart will total 35 points that can be converted into a voucher of 1,05 €.

The regular use of peganum harmala is applied as a psychopharmaceutical remedy, to activate plants that are orally inactive. Peganum harmala is sometimes used to fortify and prolong the effects of substances that are themselves active. It prevents the destruction of monoamine neurotransmitters by inhibiting the functioning of monamine oxidase enzymes, a process known as MAO inhibition. Substances such as DMT and 5-MeO-DMT become orally active and an experience with psilocybin mushrooms is prolonged and fortified.

Some users experience the effects of an infusion, or just smoking it. The effects of low dosages are sometimes referred to as 'harmala buzz' (buzz = buzzing), as it tends to produce a buzzing sensation in the head and body. This is also the initial phase for most who take a higher dosage, although in this case they usually develop even a stronger experience that is associated with vertigo, stomach cramps and vomiting. In addition, some people experience psychedelic effects, such as visual and auditory distortions and mystical phenomena.

You can just eat the seeds, mincing them well with your grinding wheels. Make sure the seeds interact with saliva for a couple of minutes before swallowing. Another way is to pulverize the seeds and put the powder in gelatin capsules. By using these methods nothing of the active ingredients is lost in the preparation process. For an experience with only peganum harmala the dosages remain experimental. You can start with 1 gram to see your reaction, 5 grams is already a high dosage for most people.

To boost a normal or high oral dosage of DMT, you can take 3 grams of seeds 15 to 60 minutes before DMT, which is already an established method. If you take more than 3 grams you will not get stronger effects but you will get physical discomfort. The experience lasts about 4 hours. The same method can be used before eating mushrooms. Enhancing the trip and its duration.

Another well-known method, which is gentler on the stomach and generally causes less vertigo, is to prepare a hot water infusion. A part of the active substances is lost when using this method, so you have to put 1 to 2 extra grams over the dosages mentioned above. Use 150 ml of water and 50 ml of lemon juice per person. Let the powdered seeds boil for 15 to 30 minutes over low heat and drain the liquid, which will be ready to drink at that time.

Otherwise there are many people who use the seeds as incense. In high dosages this can also cause MAO inhibition, although it will be shorter compared to oral ingestion.


DMT (N-dimethyltryptamine) is a triptamine alkaloid present in numerous plants such as Mimosa hostilis, Diplopterys cabrerana, Desmanthus illinoensis, Psychotria viridis and Phalaris arundinacea, it is not effective when ingested orally. This happens because it is broken down in the body by the enzyme monoamine oxidase (MAO). MAO is an important enzyme that destroys certain chemical compounds, such as drugs and poisons.

Inhibitors of the enzyme MAO interfere with the action of the enzyme and stop the degradation of chemical compounds such as DMT, making it effective when taken orally. This is the fundamental principle of visionary traditional medicine Ayahuasca.

MAO inhibitors should be used with great caution, otherwise normal foods can become poisonous. The results can be dangerous: headaches, nausea, loss of consciousness, and death. In the shamanic tradition, MAO inhibitors are used after at least one day of fasting.

They should not be taken at least 24 hours before and after taking an MAOI:

No other drug should be taken, whether natural or synthetic, as many interfere with MAOIs and could have very serious consequences.

The combination of MAOIs with other substances