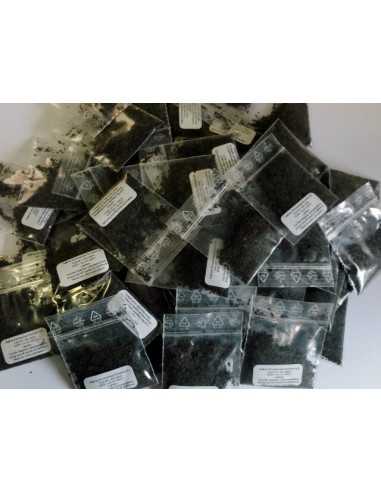 Salvia 5X standardized extract has 12.5 mg of salvinorin-A per gram of leaf.

The active ingredient of Salvia divinorum is called salvinoria-A, which causes severe hallucinations

It was believed that salvinorin-A does not act through any of the known neurotransmitters. It is said that the molecule actually is not hallucinogenic but onirógena, ie, that triggers the brain mechanism that changes the state of waking dream state, but retaining the consciousness (the so-called "conscious dreaming").

It has recently been found to be a potent agonist at kappa opioid receptors (producing spinal analgesia, miosis and sedation) and has no action on serotonin 5-HT2A, the main molecular mechanism responsible for the actions of classical hallucinogens. These studies suggest an important role of kappa receptors on the modulation of human perception and a new therapeutic avenue for treating diseases related to percepturales distortions such as schizophrenia, dementia and bipolar disorder.

Forms of employment
The leaves of Salvia divinorum have traditionally been administered orally in tea or chewed. In Europe recently took the form of dried leaves of Salvia divinorum or make extracts in very powerful and smoke them bongs or water pipes lit with torch style lighters, as salvinorin A has a high vaporization temperature, so smoked a cigar or pipe in conventional fire a conventional cigarette lighter is not much. If fresh leaves are chewed, the effects begin within 30 minutes after ingestion and lasts just over an hour. If you smoke or dry extract takes effect after 30 seconds and decline within minutes. However salvinorin-A is not considered a drug not contain any addictive ingredients, so in some countries is still quite legal.

When smoked, typically used less than half a gram of leaves equals 1 or 2 puffs. In the case of extracts, all tend to be extremely powerful (must be used with caution) as pure salvinorin-A is one of the most potent active ingredients, only comparable to LSD, since it is active from 20 micrograms. Not yet determined the lethal amount, however, doses close to or greater than 2 milligrams can be highly dangerous.

If you eat for the first time it is advisable to consume a 5x extract as 10x, 15x and 20x consumer can catapult a state out of reality in a few seconds, a world of visions and experiences that may not be ready to experiment . A dose of 5x is a low dose and cause great distortion of vision and experience a feeling as if the skin is attached or row, but always maintained consciousness of the world and the reality to which one is accustomed. With a mean dose the consumer is "absent" from reality for a few minutes mesmerized by the images you see your mind, or else the consumer may burst into laughter and move like drunk might after this the psychonaut from in a state of terror that lasts only a few minutes. A high dose of salvinorin-A between 15x and 20x destroy the whole concept of space-time consumer for long minutes, in a prepared environment and comfortable, the trip can be constructive and be remembered as something very special about the rest of the life can be an experience of self-exploration. If you do not prepare the right environment can cause a bad trip of major proportions that leave the psychonaut insecure and scared even weeks.

Psychological and physiological effects
Salvinorin A has dramatic and intense psychoactive effects, quite different from those of other psychedelics. Recent experiments with salvinorin A have shown different results ranging from alarming intensity and terror to introspective experience very pleasant. The effects of salvinorin A are very sensitive to light and sound stimulation. Its psychoactive properties can only be experienced in the dark and silent, unlike the serotonergic hallucinogens. On its physiological effects, only known to cause a decrease in body temperature, blood pressure, and sweating. There may be a slight headache the day after the administration. No studies on long-term use. Some individuals report experiences when administered smoked in your mind is abstracted, unable to recognize the reality that surrounds him, with inability to speak, and came to lose the sense of reality, but for a short period of time can to a maximum of 2 or 3 minutes.

No related article on blog