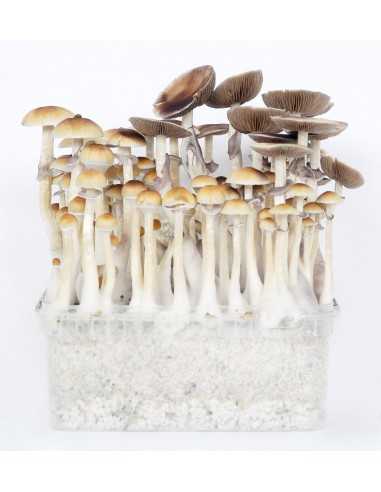 The easiest way to grow magic mushrooms, de1.25 kit liters. Come in between 250 grams and 450 grams of fresh mushrooms.

No reward points for this product because there's already a discount.

Psilocybe cubensis is the scientific name of a species of psilocybin mushrooms so named due to its entheogenic properties resulting from the different chemicals that have primarily psilocin and psilocybin.

Psilocybin
This substance, once incorporated into the body, changes the affection, the relationship with the environment and behavior. Depending on the dosage, psycho-sensory phenomena occur intermittently. Provides a state of consciousness dream-visionary with an increased perception. The primary effects of a gram of these fungi in their intake last 4 to 6 hours if taken orally. Some of the effects can range from some hilarity, disinhibition or loquacity: through visual and auditory hallucinations, and a distorted perception of reality, time and space. It may also be panic attacks, especially if you are in a particularly hostile or unknown, because the increased perception is unconscionable. The effects physically pass through an increase in body temperature, gastrointestinal disturbances (particularly nausea or vomiting), perceptual disturbances and loss of balance.
Dose
The exact dose to perceive the effects that make it famous entheogen depends on several factors, which can be distinguished: the fasting state, mood, context (to be with close friends at home to be with strangers on the street You can change drastically the effect of the drug) and finally, of course, influences the concentration of psilocybin mushroom. A small dose (between 4 and 8 mg of psilocybin) leads, after about 30 minutes after ingestion, a sense of physical relaxation and generally also associated with transient states of tranquility, fatigue and changes in perception of the environment. After an hour, most people who eat the fungus, claim to have inner clarity that allows them to see nature more clearly, (auras in flowers and people, trees with a more vivid green, the sky and setting sun as never see it in the ordinary state of consciousness).
If the dose is large (greater than 13 mg of psilocybin) the effects are much stronger, being able to experience laughter, changes in sense of time, difficulty in muscular control (inability to control facial expression, which can reveal voltage) and interpretation of abnormal sensory information. You can also experience a "spiritual journey", or feel out of the body material. Usually the person knows what he has taken, the amount and the time will the effects last.
If the dose is intermediate (more than 8 mg and less than 13 mg) can produce a combination of effects in both directions and explained.
This type of psychological sequelae associated substances tested, but may aggravate or accelerate psychological diseases already present or favor that they are developed in subjects with and there has been propensión.Aún therapeutic use against depression, chronic pain, stress, achieving positive results in the treatment of the same, although it is contradictory to its effect on mental illnesses like schizophrenia. Experimentation with this and other entheogenic substances is difficult to perform because many legal restrictions, fueled in large part by pressure from the pharmaceutical industry.
In case of accidental ingestion, do not worry go to a hospital or simply wait until wears off, alone or accompanied by a person entirely trustworthy because if not, as your perception is greater than usual may feel uncomfortable. No one has ever died from taking Psilocybe and creates dependency.
GROWING KIT

Upon receiving the kit, you must act immediately. Only you can save for a few days without cold. If you really need to wait, may be stored in the refrigerator, never in the freezer.
(1) Open the package carefully, do not use a knife and cut that could be the plastic bag. Do not touch the white air filter on the side of the bag to prevent contamination.
(2) Remove the lid and fill the grow kit with agua.Hay to submerge the entire water content. Replace the lid and let it soak for 12 to 24 hours. Finally, drain the water completely cultivation kit.
(3) place the grow kit inside the plastic bag so that the open end is up.
(4) Close the plastic bag by folding the top two inches and use two clips to hold it closed.
(5) Place the kit with the plastic bag in a place away from direct light rays, but not in the dark. Near a radiator is a good place if you do not live in a (sub) tropical.
(6) The optimum temperature is between 20 and 23 degrees Celsius, but it's no problem if the temperature is not stable all the time, the kit is not damaged if the night temperature is somewhat lower. Do not place the kit too near a radiator, temperatures above 35 degrees are harmful. The higher natural air temperatures in the tropics are no problem.
(7) Turn the kit every day or two, so that the other side of the box left side of the radiator. This will make the fruit more uniform.
(8) After a few days you will see white mycelium spreading over the top of the earth, it's where the mushrooms grow. Do not open the bag until the first mushrooms have a height of 1.5 cm. Upon arrival at that point, slightly open the bag and leave it open for an hour and a half, to refresh. While one can grow fresh air and spray water into the bag every day (against the inside of the bag, not over the mushroom!).
(9) Cut the first fruiting completely just before the opening of the greatest hats. Cut also the smallest. It is best not to interfere too much with the activity of the kit: wait until there is another fruit grown completely before cutting. Leave that are shorter than 1.5 cm. When they start to really grow, examine every day, because they grow very quickly. You need to remember to pick the mushrooms twisting, no pulling them or cutting them. It is better for the earth.
If you see that the earth is dry and in some places does not touch the container, it is advisable to harvest the mushrooms and soak the kit as in step 2.
(10) If circumstances are optimal, may be obtained from 250 to 350 grams of fresh mushrooms (25 - 35 grams dry) of a single kit in three or more fruiting.
(11) It will take one to three weeks before you can harvest the first fruit, a week for the second and possibly one for the third. Do not leave very quickly, as it often happens that after a month still appear more mushrooms. When the mycelium begins to be green or purple (a fungi infection), you must throw the bag away without re-open.

Nothing more to collect psilocybe cubensis magic mushrooms in Mexico, spread it on paper towels. If you have a dehumidifier set it up pointing the dry air outlet directly on magic mushrooms, also a fan in the room would be worth if there is not much moisture in a couple of days the mushrooms will completely dry, to keep for a long time . It is advisable that once you have dried cubensis psilocybe mushrooms the stores in a glass jar closed, we are concerned that dried mushrooms are the least possible contact with the air, not from the sun.
Make sure the mushrooms are completely dry, fold them, if they break, they are dry. If the guards are not too early really dry and turn black.
Another method for drying mushrooms, place the mushrooms on a baking tray and put it up to 40 º C with optional fan, do not put the fan in the oven is an option of cooking that usually have ovens, monitors mushrooms until they are dry.