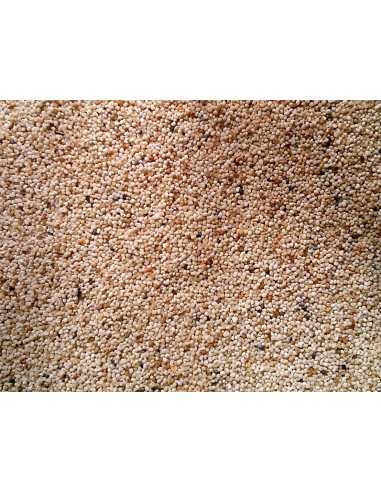 By buying this product you can collect up to 78 loyalty points. Your cart will total 78 points that can be converted into a voucher of 2,34 €.

The seeds of poppy (Papaver somniferum) are the source of opium and its chemical derivatives morphine and heroin. In the United States and in Europe the poppy seeds are legal. This is because they do not contain any of the alkaloids present in the adult plant poppy, like morphine, codeine, papaverine and thebaine.

The poppy flower grows to a height DE1 meter. This plant occurs outdoors, germinates in the fall or spring, it blooms in summer, and sheds its seeds again in the fall. Its flowers range in color from white to purple and any shade between red or pink. Native to southeastern Europe and western Asia, but spread throughout Europe and Asia, where it grows in culture and in the wild ..

The ornamental cultivation, small scale, it is perfectly legal in Spain. Opium poppy is grown in loose soil, nutritious and excellent drainage. A suitable land is a sterile mix of peat and river sand or force, marine beach ever since contedría too much salt. It grows best in cool weather - 5 to 10 ° C, and an altitude of 800 m. a1.500 In the Mediterranean area planted in October or November in the rest of the peninsula is best done in late winter or early spring, frost can kill flowers, but too much heat can prevent germination. It is usually planted after the last frost. Directly into the ground, without transplants. Before sowing abundantly watered and allowed to dry a couple of weeks. The seeds can be put directly on the ground or mixed with some sand before sowing. If grown outdoors should plow after rain or watering, weeds are used as organic fertilizer can be mixed with manure. After sowing must be kept moist, but not too wet. When young are watered a little every day with a spray, avoid watering with chlorinated water. Leaving the flowers and do not need watering. Germinate in a week or two. If they leave many seedlings should leave only the strongest, separated by about 20 cms. Should be avoided at first direct exposure to the sun.
In the growth phase is paid little and once a month, or month and a half, with a complete fertilizer .. The flowers last only a little, once the petals fall. The poppy heads are harvested at 14 to 21 days after the petals fall. It is important not to water the plants from the fall of the petals.

Growing in pots: Use containers with a minimum of 25x25 cm. Large pots = large plants. Make a few holes in the bottom and put a layer of gravel 2 cmpara drainage, prepare the substrate (eg, Universal Substrate, 50% + Brown Earth, 20% + Sand and Perlite, 30%) which fill the pots . Moistened prior to planting, we will do as you would outdoors.

HARVEST
Was conducted between June and July, depending on the planting, climate, latitude, etc, and in the days following the fall of the flower, when the capsule has reached its maximum size (the tips of the crown placed on the heads are up).
They proceed to make one or more cuts, almost superficial, with a razor blade or similar in each of the heads being careful to cut only the outer wall to prevent the Opium being absorbed into the capsule, lost.

BEWARE, uncut heads can not be re-indented!.
These cuts will flow a white latex which in contact with air will turn dark to almost black, this substance when dried is what is known as opium. This operation may be repeated several times at intervals of 3-4 days.
No excessive harvesting rain or dew, the water carries the alkaloids.
Cuts can be made early in the morning, leaving dry the latex in the plant for 1 or 2 days, to lose much of the moisture before pickup.
Another system is to collect, at the same time to take the court with the help of a vessel, then beaten with a spatula putting the sun to dry, after a few days we will keep it dry in a cool, dark place.
Two weeks later, when it takes a reddish brown color, we have raw opium. Over time heals Opium producing weight loss but gaining in quality and taste.

Eaten: The Opium once dry can be sprayed or make a small ball with the fingers kneading, wrapping it with cigarette paper or entering an empty capsule (to avoid the bitter taste, somewhat unpleasant) and eating. Average Dose: 300-600mg depending on people and tolerance.

Laudanum (tincture of opium): Mix equal parts of opium, water and ethyl alcohol, is often to add some spices for flavor (do not serve alcohol pharmacy 96 º as it contains a substance to prevent ingestion). Also can dilute the opium in a liqueur.

Formerly a drink prepared by mixing the crushed heads with wine and honey, adding spices to enhance flavor. In parts of Africa the plant is smoked previously dried and crushed, mixed with snuff and / or cannabis.


EXTRACTION OF OPIUM
All plant parts contain opium but its greatest concentration is in the walls of the capsules. Of dried plants (poppy straw) and mainly of the heads can also remove a high percentage of opium, but with a power of two or three times lower than raw opium.

INFUSION: The best way to leverage a small crop!. Grind poppy several heads (previously empty seeds). Pour the resulting powder in a saucepan with boiling water and mix quickly, leaving no more than 3-4 seconds to boil. It turns off and let stand covered 15 minutes. Strain through a fine filter and sweeten to gusto.Dosis half: 10-15 heads by size (2 g approx. Powder).

EXTRACT INFUSION (solid)
Make an infusion with the dried and crushed capsules no fine in plenty of water. Add the lemon juice or vinegar, will help the dissolution. Unfiltered, directly to a water bath (do not get to boil) for 1 hour approx., Stirring occasionally. Strain through a fine filter, type coffee book. With residues resulting repeat the process 2 or 3 times. Reduce all the liquid back into double boiler until it thickens and the bottom of the pot remains a paste similar to opium refined. 150 gr. crushed heads produce between 12 to 14 gr. of dry residue.

ETHER EXTRACT OR ALCOHOL
You can also perform an extraction putting their heads crushed and soaked for a few days in petroleum ether or ethyl alcohol, filtering the liquid and evaporate the solvent leaving the final result is similar to the previous method (caution, fumes from the Solvents can be explosive).


Refining of raw opium (Preparation suitable for smoking)
This process involves changing the physical state of Opium (from solid to liquid) to facilitate separation of solid impurities by a simple filtering operation.

- The raw opium, dried latex of Papaver somniferum (recommended crushing to facilitate dissolution) is placed in a pot with hot water not to boil, stirring until dissolved. Filter and remove the impurities (dirt, plant debris etc ....). Coffee filters are easily muffled, it is best to use a coffee filter or a permanent maya fine.

- This produces a brown fluid which is heated without reaching boiling water bath to evaporate the water almost completely in the background leaving a thick paste, dark brown, withdrawing before their consistency is similar to putty because if it dries completely, it will be very difficult to come off the bottom of the pot. Finish drying in the sun or a lamp.

- An approximate ratio would be 6 l. of water per 1 kg of raw dry opium, the important thing is that I did not get so dry that can burn, if necessary add small amounts of water.

- It is recommended not to exceed the 70/80 ° C to minimize the destruction of alkaloids from the heat.

- It would also be possible to perform the refining fresh latex from trying to adjust the amount of water.

Opium so treated is prepared for smoking and is also less indigestible to eat.

If you choose to use smoked, it is preferable to use an open pipe and a warm base to vaporize it, because in the typical closed pipe bowl China's Opium is charred and hopelessly clog the small hole in the bowl.

Opium can be refined after further processing to obtain the "chandoo", this is a very long, laborious and very difficult to which required high skills and job training.

CONSERVATION
In cool, dry place, excessive moisture and high temperatures can damage the opium, if it has been well dried very stable and can be stored for several years.


EFFECTS
It is a central nervous system depressant. Its main effect is the disappearance of pain (subjective appreciation). Intoxication produces a delicious, pleasant drowsiness, excitement alive and reduction of aggression.

Throughout history Opium has been used in medicine for everything from analgesic, antitussive, antibacterial, tonic, for bruises, asthma, fever, rheumatism, ear infections, ulcers, tumors, different, cancer skin, stomach, vagina, ... the sclerosis of the liver, polyps, etc.. It was also used as an aphrodisiac and as depending anaphrodisiac this dose and the habit that had.
Obtained seed oil paints, soaps, food products, confectionery ...

The consumption of antidepressants, sedatives, hypnotics, or alcohol with opium can increase its sedative and depressant action of SCN (Do not mix with MAOIs).

NOTE: The Opium has a high tolerance with prolonged use can cause physical and psychological addiction to an abrupt halt fácilmente.Tras can lead to withdrawal among other things characterized by anxiety, mydriasis, yawning, muscle spasms, rhinorrhea, restlessness and insomnia .

The Opium detection period in a standard urine test is 24/48 hours from their jobs.