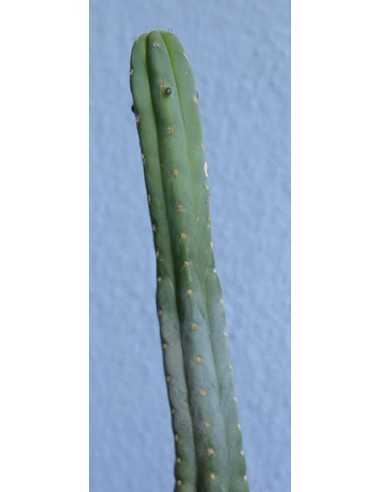 Echinopsis pachanoi, commonly called San Pedro cactus. Native to the Andes and Peru. It grows in the wild between 1000 and 3000 meters above sea level.

By buying this product you can collect up to 6 loyalty points. Your cart will total 6 points that can be converted into a voucher of 0,18 €.

Columnar cactus shrub size and much branched from the base. 3-a7 m high and usually without distinguishing the main trunk. Stems cylindrical, dark green, sometimes glaucous, 5 m long and 8-15 cm in diameter. Of 5-14 ribs, broad, rounded, with deep notches before each ereola, these are whitish and close together. Of 3-7 spines (sometimes absent), brownish, 0.5 to 2 cm long. The flowers, white, born near the apex of the stem, are nocturnal and a strong fragrance, 19-24 cm long and 3-4 cm in diameter and floral tube pericarpel with black hairs. Fruit oblong, dark green, 5-6 cm long and 3 cm in diameter.

This cactus is easy to grow in most places. Accustomed to the wild in the Andes at high altitudes and abundant rainfall, can withstand temperatures well below what many other species resist. Requires a fertile, well drained.
The average growth is half a meter per year. Is susceptible to fungal diseases if watered too much. Can cause burns or have a reaction due to overexposure chlorotic solar, so it's best to keep it in partial shade during the summer in temperate latitudes.

MultiplicaciónSe easily multiplied by seeds. The requirements are to maintain a high degree of moisture, a nutrient substrate mixture with good drainage, adequate water (but not too much) and light.
It also spreads by means of cuttings, which is obtained a clone of the mother plant.

It has a long tradition in traditional Andean medicine. Some studies have found archaeological evidence of its use dating back two thousand years, to the Moche culture. It was used by the natives on religious holidays for their hallucinogenic properties due to the large number of alkaloids that have, especially mescaline. He prepared a drink called "aguacoya" or "cimora" is generally mixed with other entheogenic plants.

PsicoactividadDespués peyote, San Pedro is the most concentration of mescaline present. Mescaline has been used for various purposes. Traditionally played a key role in religious rituals, among Native Americans, who believe that this substance opens the spirit. Having penetrated into other cultures, mescaline was used for recreational purposes, but also, as entactogens to facilitate psicoexploración.

Cultivating a peyote or other mescaline cacti from seeds:

Mixed land: 33% sand, 33% coconut land, 33% loam or topsoil and 1% calcium. The soil mix must be sterilized and free of disease organisms and sand granules must be inconsistent. The allowed pH is between 6.5 and 7.2 (high calcium and low nitrogen). Spread the seeds on the surface of the earth.

Growth temperature: general range of 20 to 30 ° C, optimal finite range of 23 ° C, with a nocturnal dip in at least 18 º C. During the germination period, the growth area should be covered with a protection to create a 50% intensity of direct sunlight with a humidity of almost 100%.

Irrigation: root fertilization or soil nutrients: half dose of 7-40-6 fertilizer, about 45 days after planting. The fast-growing cactus can consume lots of water. Do not water too slow-growing cacti. Germination time is 7-21 days. Move to direct sunlight when measuring an inch. If the cactus turns yellow, exposing more light, if it turns red, post less.