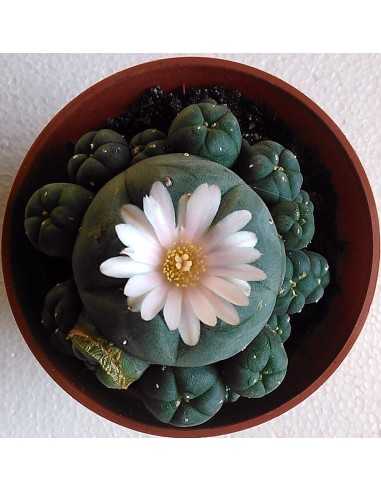 The peyote, a plant endemic to northern Mexico and southern United States has been used for thousands of years by several indigenous groups in spiritual rituals and as a medicinal plant. The use of plants enteo nous has been prevalent in many cultures around the world, as vehicles to more and better perception of the environment and the individual itself.

By buying this product you can collect up to 7 loyalty points. Your cart will total 7 points that can be converted into a voucher of 0,21 €.

Peyote is a small spineless cactus, native to the southeastern United States and northern Mexico, especially the region of the Rio Grande and the desert of Chihuahua.

The peyote cactus is a small globular, round and about 12 centimeters in diameter, with a bluish green color, although in some desert areas may acquire shades of white or reddish due to dust and sun. Lack spines except at the initial stage of growth, and instead of these extensions has a woolly pubescent white or slightly yellow, similar to cotton, called glochidia.

The flower of peyote is usually pale pinkish white color may vary depending on the species, variety or phenotype in question.

Its seeds are black, warty and tiny size. It takes about 3 to 6 months to develop, and once mature, protrude through the apical meristem of the plant within a fleshy pods, pinkish-reddish or yellowish white.

The top of the cactus protruding from the soil, also called the crown, is disc-shaped buttons that are cut and dried root. These buttons are generally chewed or boiled in water to make a tea psychotropic. The effective dose of mescaline is about 0.3 to 0.5 g., equivalent to 5 g of dry peyote experience lasts about 12 hours.

All Lophophora species are extremely slow growing, often take more than 30 years to reach flowering age (the size of a golf ball, not including the root). Cultivated specimens grow faster, it usually takes between 6 and 10 years to reach maturity from seedlings seedlings. Because of this slow growth and over-collection is subject to, it is considered endangered.

Peyote, a bitter taste because it contains about 60 alkaloids, has endured over the centuries as a kind sacred to some indigenous cultures. But the best known feature of this plant is the single gene that produces enteo effect in the body when ingested. Through ritual practices enteo nous plants indigenous ancient civilizations sought to "induce experiences of initiation to certain mysteries and to cure diseases of body and soul."

Peyote use as a medicinal plant:

In Indian traditional medicine of some towns has been used as a remedy for diabetes, pneumonia and cancer, as an analgesic, against toothache, rheumatism or arthritis, asthma, intestinal upset, fever, to facilitate delivery and increase sexual desire, also for effects caused by snake bite, scorpion stings and some other type of poisoning.

In psychotherapy has been used by prescription for the treatment of neurasthenia. It has also been used in cardiology. We have seen that has great antibacterial power, being able to remove strains that showed resistance to penicillins.

The molecule of mescaline is a phenethylamine structurally related to norepinephrine and dopamine, which has strong effects on the peripheral autonomic nervous system and central nervous system. Probably no drug in this group has the capacity to evoke visions of such dazzling, especially to produce the most fantastic mix of form and color. After an initial phase of euphoria ensues a period of peace of mind and muscle relaxation, where the attention is diverted from perceptual stimuli directed towards introspection and meditation.

Among the effects that ingestion are the visions, distortion of space-time coordinates and alterations in body schema. Its effects vary depending on consumer sentiment, expectations and the surrounding environment, so it has traditionally emphasized the importance of the use of this drug was combined with very conscientious preparations, the effects could be unpredictable. The preparation and handling making this plant should be carried out by teachers Marakames-shamans or peyote, the Huichol ethnic generally, who have inherited a millennial knowledge management.

In its natural state peyote buttons are chewed alone or together with any liquid, the taste is quite bitter. When dehydrated cactus mescaline retained indefinitely. Can be reduced to powder to prepare a tea or added to fruit juice. The pure mescaline is administered orally or intravenously.

Tolerance is virtually nil if the doses are spaced at least a month. Only after years or decades of monthly or bi-weekly administrations, the dose may be doubled or tripled. There is no evidence that consumption of peyote generate physical or psychological addiction.

Cultivating a peyote or other mescaline cacti from seeds:

Mixed land: 33% sand, 33% coconut land, 33% loam or topsoil and 1% calcium. The soil mix must be sterilized and free of disease organisms and sand granules must be inconsistent. The allowed pH is between 6.5 and 7.2 (high calcium and low nitrogen). Spread the seeds on the surface of the earth.

Growth temperature: general range of 20 to 30 ° C, optimal finite range of 23 ° C, with a nocturnal dip in at least 18 º C. During the germination period, the growth area should be covered with a protection to create a 50% intensity of direct sunlight with a humidity of almost 100%.

Irrigation: root fertilization or soil nutrients: half dose of 7-40-6 fertilizer, about 45 days after planting. The fast-growing cactus can consume lots of water. Do not water too slow-growing cacti. Germination time is 7-21 days. Move to direct sunlight when measuring an inch. If the cactus turns yellow, exposing more light, if it turns red, post less.