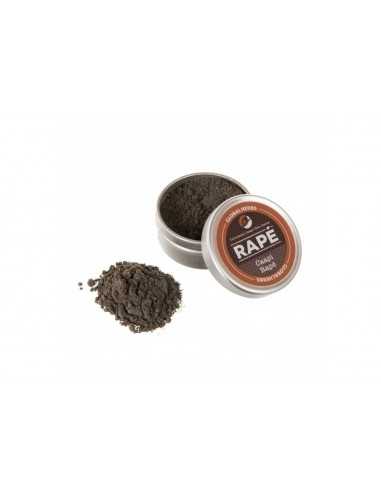 This specific Rapé blend is made with leafs of the Banisteriopsis Caapi tree – of which the vine is one of the main components of Ayahuasca. Caapi contains harmine and harmaline, which are MAO-inhibiting alkaloids. Therefore, it can strongly enhance the effects of other psychedelic substances – which is why this Rapé blend is often used in Ayahuasca ceremonies.

Rapé (pronounced 'ha-pé') is a snuff, that has been used by indigenous tribes of the Amazon basin, for thousands of years. The main ingredient of this shamanic powder is wild tobacco (Nicotiana Rustica), enriched with unique blends of different plants and ashes.

Although Rapé can be used by itself, it is often taken in ayahuasca ceremonies, to enhance and direct the experience.

The Amazonian tribes have recently revealed their formula for Rapé to spread the knowledge about this great, remedial snuff. We are super thrilled to introduce you to these unique blends from the rainforest.

Rapé Caapi Effects
Rapé affects both body and spirit. On a spiritual level, Rapé is known to induce a grounded, yet energetic state of mind. Other effects include the release of negative thought patterns, connectedness to the earth and disappearance of mental fog and confusion.

How to use?
Since Rapé tends to have a very physical effect, it's not really your best choice for parties. It's best enjoyed in a ceremonial - or more conversational way with friends. There are two basic ways to administer rapé: the soplada (where another person blows the powder into your nose) or by self-administration with a crooked pipe made of wood called kuripe. The big advantage of using a kuripe is that you are in total control of the dosage.

Caapi Rapé
There are many different Rapé blends, all of which have their authentic additional ingredients that all enhance and enrich your Rapé experience in their own way.

This specific Rapé blend is made with leafs of the Banisteriopsis Caapi tree – of which the vine is one of the main components of Ayahuasca. Caapi contains harmine and harmaline, which are MAO-inhibiting alkaloids. Therefore, it can strongly enhance the effects of other psychedelic substances – which is why this Rapé blend is often used in Ayahuasca ceremonies.

If Caapi Rapé is used on its own, it will add a dreamy, trance effect to your Rapé experience.
warning