Kanna or Sceletium tortuosum. The status of the question.

Kanna’s extract is the extract of the plant Sceletium tortuosum, a plant from the Aizoaceae family, that comes from the south of Africa. It became popular thanks to the use given by the (hotentotes) nomads. This African tribe used to chew leaves while walking and going hunting, to improve their mood, as an empathogens and a relaxant.

Since its discovery, kanna has been consumed in several ways: dye, chewing directly, smoking the resulting residue of the chewing or, for example, chewing a fermentation done with the dry plant, widely known as kougoed.

Of all the virtues of sceletium, it stands out its sedative, analgesic and even hallucinogenic effect, according to some. However, diverse scientific studies have tried to shed some light on the qualities of this African plant, is still very unknown.

In 1996, the authors Smith, Crouch, Gericke and Hirst, carried out a literature review on sceletium in an article entitled “Psychoactive constituents of the genus Sceletium N. E. Br. and other Mesembryanthemaceae: a review”. In this, there were also gathered descriptions of preparation techniques and the use of Kougoed.

As explained by the sagacious botanists, in sceletium different alkaloids can be found, being mesembrine the most important, and advise: “In conclusion, there is the necessity of a deeper pharmacological study of these alkaloids, based on their narcotic-anxiolytic properties, their strong synergy with other psychomimetics, their moderate toxicity and anticancer activity”. 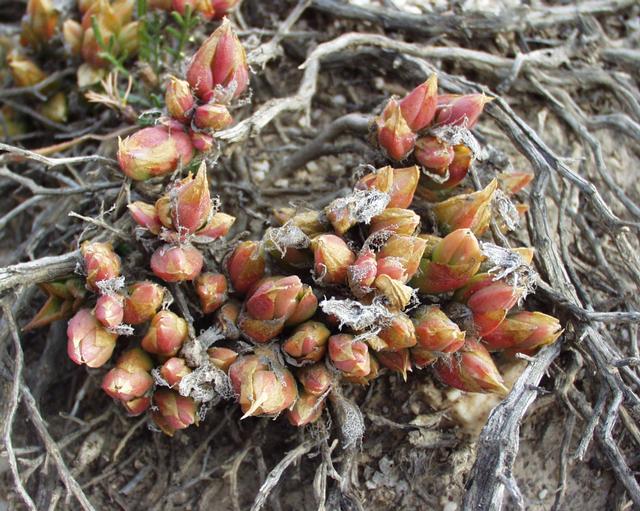 Researchers did not wait for a response on their advice and inspired by the qualities of the plant, decided to proceed with their study. This time, doing a comparative analysis of the distribution of alkaloid mesembrine in unrefined kanna, and in la kanna already fermented in kougoed (“The distribution of mesembrine alkaloids in selected taxa of kanna and their modification in the Sceletium derived ‘Kougoed”). This second study, published two years later, would proof an increase in every level of alkaloids when kanna is warmed after being grinded and crushed to achieve extraction. This converts kougoed into a traditional and refined method of preparation, implemented by the hotentotes throughout generations, in order to increase the pharmacological action of the plant.

Once discovered the hotentote secret, many botanists acknowledged the testimony of the existent investigations and expanded a bit the understanding, although scarce, that we h ave of sceletium.

Some articles specially interesting are dedicated to the effects that kanna has on stress and anxiety. “The effects of Sceletium tortuosum in an in vivo model of psychological stress”, by C. Smith, or “Neural processing of fearful faces: effects of anxiety are gated by perceptual capacity limitations”, by Bishop, Jenkins and Laurens, or “The effects of Sceletium tortuosum (L.) N.E.Br. extract fraction in the chick anxiety-depression model”, by Carpenter, Zulfiqar and Khan (among other authors), are some of the titles.

In Examine.com, specialized and databank, sum up the status of the question explaining that “the biological anxiety, or anxiety induced by cognitive stress, seems to be diminished when Kanna is taken before the exam”, but proof related to depression are insufficient to affirm correctly about its effects, however “this herb could have influence in a depression”.

Even though there are some side effects with its consumption (headaches, nausea, and other), addictive properties or toxic effects have not been found in continuous consumption in humans (3 weeks, doses of 25 mg). Although it is true that, its consumption, simultaneously with cannabis, increases the effects of both plants.

Memory is not affected but signs of improvement are shown in general cognition of the individuals that consume it. Besides, about the psychoactive effects, these can be enhanced during the consumption of kanna because it inhibits PDE4.

All of this explains the literature of Sceletium tortuosum and, however, it is nothing. Nothing when compared to the number of mysteries that surrounds this plant, as for many other plants.