"We are on vacations. Read more" 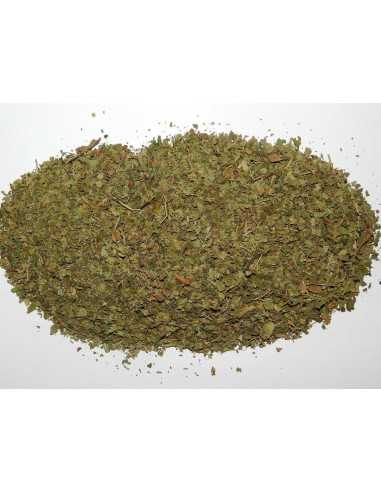 Kratom is a tree native to Southeast Asia, particularly Malaysia and Thailand, but also for some time now grown in Indonesia, India, Bali .., reaches approximately 28 meters in height.

By buying this product you can collect up to 89 loyalty points. Your cart will total 89 points that can be converted into a voucher of 2,67 €.

It belongs to the family Rubiaceae, which are also like the coffee plants. Its leaves contain more than 25 alkaloids, the most famous being mitragynine speciosa.

In Southeast Asia consumed kratom chewing the fresh leaves, but given the difficulty of getting fresh kratom leaves in the West, here is consumed preparing tea leaves.

Kratom has a curious effect, and that in turn is stimulating, analgesic and sedative, depending on the dose ingested kratom, at low doses are usually stimulants, enhancing mental alertness, physical energy and sociability, while high-dose effects are analgesics and sedatives. For this purpose painkillers and sedatives, and some others, kratom is also known as the opium of the poor, and as this relieves pain, eliminates short cough and diarrhea, producing a great sense of well being, with eyes closed you can get to daydream, really a very nice feeling.

As with opium and all its derivatives, the body builds tolerance to kratom consumption. If consumed regularly have to go up the kratom dose to achieve the same effects.

Depending on the dose and the body of each, the effects of kratom last two to six hours. At low doses can lead a normal life, but at high doses is the only thing you feel like lying down, ideal for listening to music, watch TV, or having sex, as the kratom deferred the male orgasm.

1.- Put 50 grs of dry leaves of kratom in a casserole, add 2 liters of water and a few drops of lemon juice, the chains of some alkaloids do not break without the lemon.

2.- Boil on low heat without covering for 30 minutes.

3.- Strain the liquid by crushing the leaves to make good use of all the tea. Discard the leaves.

4.- The resulting liquid is put on a gentle fire until it reduces more or less to a third.

Has put a glass of boiling water with a squeeze of lemon in a saucepan or microwave, when it reaches boiling point add 2 or 3grs resin and stir until dissolved.

Dissolve 5ml in a juice glass of water, pour batter ..... or directly in the mouth.

Once done, Kratom tea can be kept five days in the fridge, although it is advisable to consume it as soon as possible on an empty stomach, if from the last meal four or five hours waiting for tea kratom, the effects of this will be higher. It can be kept longer (even six months) by adding one part alcohol (vodka, gin ...) for three kratom tea.

Kratom is not a medicine, so do not use it as such. Although it is legal in most countries worldwide, its use is not regulated.

If you're going to consume kratom, use common sense, not drive, use machinery, not mezclez with other drugs. Do not consume if, you are pregnant, those breastfeeding, you are younger, you have good health. Use common sense, as you would any other drug.

All information contained in this website is only informative character. We do not encourage the consumption of kratom, just as they do inform indigenous tribes. Kratom we sell on this website is solely and exclusively for decorative use, or use esencieros burn as incense, whatever you want to do with, is solely your responsibility.

The ingestion dose varies widely depending on the quality of kratom, tolerance, move your body to him, and the fart you want to catch.

Ideally, the kratom is try little by little, as its effects are felt very quickly.

With the kratom sold in this website from 2 to 5 grams are you prepared enough to feel stimulated, mentally alert, with a great physical energy and very sociable.

If you take another dose of this you begin to feel a little sedation, and relieves pain, if any tuvieses, and a little euphoric.

As you take more of these doses TES analgesia and sedation will increase until it enters a sort of state of sleep-sail, which already is the only thing you feel like lying down with eyes closed is entered into a kind onirico status, which gives the feeling of daydreaming. At this dose produces a feeling of inner peace very nice.

A simple way to dose kratom tea with 25grs serious. and leave you divide it into five doses.

The first thing to do is differentiate between "variety" and "denomination" as on the internet to a single variety is easy to find several different names.

As such there are three varieties, red vein, vein and vein white green. In turn, these three varieties may come from thailand, indonesia, bali, india ..... and this source in our opinion most important, not whether it is red or green vein, being without doubt the most potent variety of Thai.

Thai provenance can find different qualities in turn, being "supreme quality kratom Thai" the highest of all. Other denominations of Thai kratom we can find are "super premium", "premium", "Maeng da," "commercial premium "..... It is very likely that one will call kratom ways dependiedo the web.

The same applies to the Indonesian kratom source, "premium", "super premium", "commercial premium" ... being in our view them all in a very similar quality.